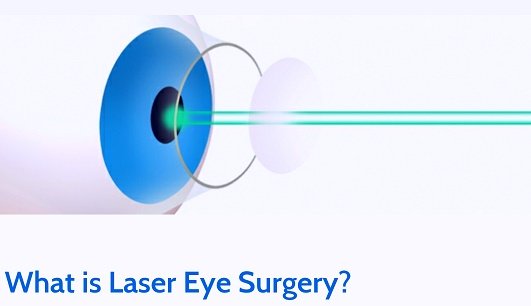 Each of the four laser eye surgery procedures below uses the same special laser, called an “excimer” laser, to reshape the cornea. This is what corrects vision. But laser eye surgery can vary in the specifics of the procedure, the recovery time, which surgical instruments are used and your patient candidacy. You might be a better candidate for PRK, for instance, than for LASIK.
Your ophthalmologist should be able to determine from a comprehensive, laser-eye-surgery-specific eye exam which procedure is best for you..Most patients achieve 20/20 or better vision after laser eye surgery.

LASIK :
LASIK is the most common laser eye surgery. LASIK starts with the creation of a thin flap in the cornea. Your surgeon uses a blade or a laser to make this flap. The laser is considered more desirable by some doctors because of its precision, such as fewer visually significant complications ; however, all-laser LASIK costs a bit more than LASIK that uses a blade. Once the flap is created, the excimer laser is used to reshape the cornea, which corrects the refractive error.

PRK :
PRK is the second most common type of laser eye surgery. PRK starts with the removal of a portion of surface of the cornea or epithelial tissue. There is therefore no need for flap creation, and the removed tissue grows back. Some patients prefer PRK because they don’t want a corneal flap, and some patients are better candidates for PRK eye surgery than for LASIK (for instance, people with thin corneas). Once the epithelium is removed, a laser is used to reshape the cornea. The laser is the same (i.e., excimer) as the one used in LASIK.
The PRK recovery period is a bit longer than that of LASIK.

LASEK :
LASEK is similar to LASIK and PRK, but it starts with the application of alcohol to the corneal epithelium. This loosens the outermost corneal cells and allows the surgeon to move them out of the way, without removing them, for the laser procedure. After reshaping the stroma with the excimer laser , the surgeon can replace the sheet of epithelial cells and put a contact lens to let it heal.
LASEK can be a good option for patients with thin corneas.

EPI-LASIK :
Epi-LASIK starts the way LASIK does, except the flap is thinner and made only of epithelial tissue. Once the flap is created, it is moved aside, just enough that the surgeon can reshape the stroma underneath with the excimer laser. The flap of epithelium is then replaced and covered with a contact-lens bandage to heal. Some consider Epi-LASIK a hybrid of LASIK and LASEK. Some surgeons believe Epi-LASIK is a good option because the flap exists only in the epithelium layer, and because there’s no alcohol used during the procedure.

He was born in Ankara 20.11.1969. He will be secondary school in Ankara,and completed his primary education and education at TED Found Ankara College.  He started medical school by studying English at Meditzinkski Universitet Plovdiv in Bulgaria. Creating a task as a GP for a while followed by England in the United Kingdom/England. He graduated from Queen Mary University of London as a Master of Science(Ophthalmology Specialty).(1996-2000) He graduated from the University of Bristol School of Medicine. Scientific,Surgical Literature.(2000-2001) living, graduation news for a short time,vitreoretinal field duties at Morfields International Eye's of Cilical Surgery Hospital. He has worked in many effective surgeries with good academics and surgeons of the west,such as Prof.Dr. AndrewDavid Dick & Prof. Dr. Rebecca Ford. The ...