Background: There are various other collaterals draining into the venous system around the saphenofemoral junction in addition to the great saphenous vein. We aimed to determine the efﬁciency of prophylactic ablation of tributary veins in long term varicose vein and symptom recurrence. Methods: Two hundred and sixty-three consecutive patients whom underwent radiofrequency ablation therapy for the treatment of superﬁcial venous reﬂux disease were investigated. There were 129 patients who received isolated great saphenous vein ablation (Group A) where as 134 patients underwent ablation of the other tributary veins in addition to the great saphenous vein (Group B) between June 2015 and January 2017. The tributary superﬁcial veins; reﬂuxing and/or not reﬂuxing, draining into the saphenofemoral junction were selectively catheterized and ablated in Group B. Patients are followed at least 1 year after the procedures regulary and researched for recurrence of varciose veins and symptoms. Results: Gender, mean age, body mass index, diameter of the great saphenous veins, small saphenous vein disease, and grade of deep venous insufﬁciency did not differ signiﬁcantly between the two groups. The mean number of tributary veins were similar in both groups (n: 1.9 ± 0.4 in Group A vs. n: 1.8 ±0.7 in Group B) which were detected preoperatively as well as during the procedure. The mean number of ablated tributary venous pathways could be 1.4 ±0.6 in Group B. During the follow up period symptoms related with varicose veins recurred in 19 patients in Group A where as in 7 patients in Group B ( P < 0.05). Three of these symptomatic patients in Group B were the ones in whom the tributary pathways could not be catheterized ablated where as 14 patients in Group A were diagnosed with newly reﬂuxing tributary pathways. All the symptomatic patients in both groups were managed medically and/or with additional interventions. Conclusion: The absence of any fascial unsheathing and the parietal weakness are suggestive of a lower resistance of the tributary veins wall, so collapse and size of veins make it more complex to catheterization regarding to great saphenous vein. Ablation of the tributary superﬁcial venous pathways during the treatment of great saphenous vein reﬂux disease decreased the rate of recurrence of superﬁcial venous reﬂux disease and patients symtoms in our modest cohort. 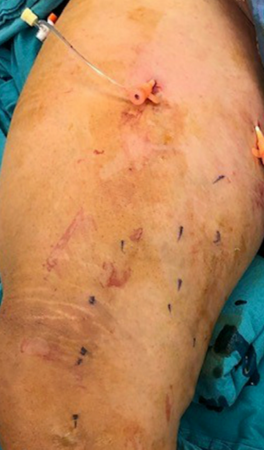